The term Children in Care applies to children and young people up to the age of 18 for whom the Local Authority provides care and accommodation on behalf of their parent(s) or for whom the Local Authority has either sole or shared parental responsibility by virtue of a court order. Children and young people enter care due to a range of circumstances often due to the risk or occurrence of abuse or neglect. Inequalities including health inequalities such as living in areas of deprivation, poor childhood experiences and suffering abuse and neglect impact disproportionately on Children in Care compared with their peers and it is known that this can lead to poorer outcomes for young people leaving care such as: The following summary of data relating to CiC in Wakefield provides comparative population level information about the cohort of CiC and current outcomes in terms of attainment and health and how this compares to England and statistical neighbour data. The data which has been included is that which is published annually by the Department for Education based on the financial year to 31st March. In reviewing this data some recommendations have been identified and comment is made on whether and how these are being addressed. 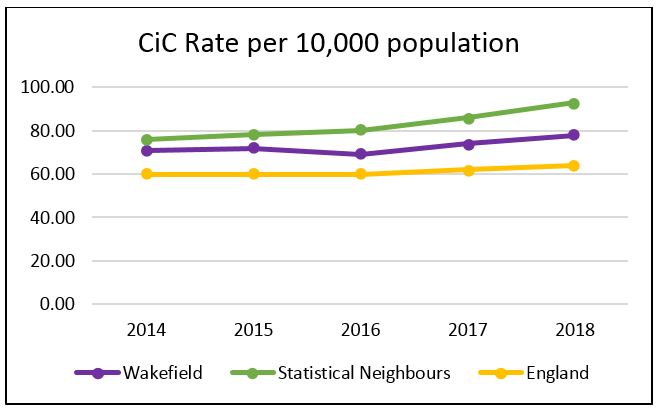 The rate of CiC (per 10K population) in Wakefield has increased over the last 4 years from 71 per 10,000 children in 2014 to 78 in 2018 and as at the 31st of March 2018 there were 562 Children in Care. This rate is higher than the rate for England of 64 but lower than statistical neighbour rate of 92.80. It should be noted that there has been an increasing trend over the last 4 years for statistical neighbours and England as a whole. The actual number of CiC in Wakefield has increased by 15% since 2014 when there were 491.

% of CiC with SEN Statement/ EHCP 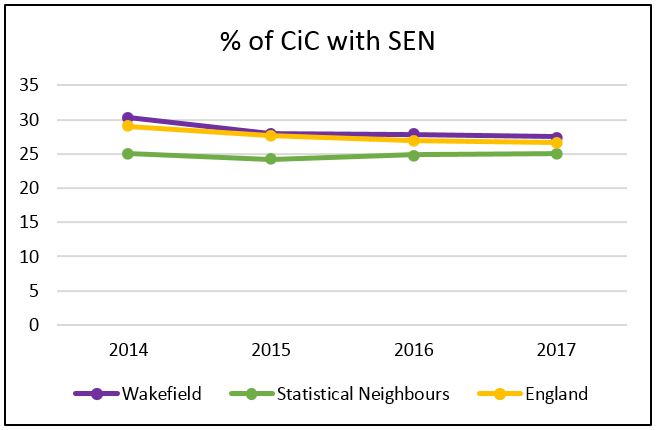 In Wakefield, the % of CiC with an SEN statement or EHCP in 2017 was 27.5%, slightly higher than the national rate of 26.7% and statistical neighbour rate of 24.97%. Over the last 4 years, this rate has reduced slightly from 30.3% in 2014 although there is still a significant number of CiC who need additional support within the education setting. In Wakefield in 2017 32.20% were identified with SEN but had no statement/EHCP.   In terms of attainment, average progress scores for CiC at key stage 2 (end of primary school) and key stage 4 (end of secondary school) have been considered. Average progress scores aim to capture the progress pupils make from the end of primary school to the end of secondary school. Pupils’ results are compared to the actual achievements of other pupils with similar prior attainment. A score of 0 means pupils on average do about as well as those with similar prior attainment nationally. A positive score means pupils on average do better and a negative score means pupils on average do worse, although this does not mean that pupils did not make progress rather they made less progress than other pupils nationally. The following table shows attainment progress scores for CiC at key stage 2 and key stage 4.

In 2017 CiC at key stage 4 made less progress than others with a similar attainment level although they made more progress than CiC at key stage 4 in 2016, resulting in a better score. The average score was better in Wakefield in 2017 compared with national and statistical neighbour rate. Supporting CiC within the secondary school setting should be considered as an area for improvement to enable CiC in Wakefield to attain in line with their national peers.

In the last few years, the % of CiC subject to a conviction, final warning or reprimand during the year have been so low, that comparison with the national or statistical neighbour rates is inappropriate. It may be helpful to review data to confirm low levels.

In the last few years, the % of CiC identified as having a substance misuse problem during the year have been so low, that comparison with the national or statistical neighbour rates is inappropriate. It may be helpful to review data to confirm low levels.

Whilst most CiC experience the same health issues as their peers, their past experiences and family situations can exacerbate ongoing issues and conditions which have been impacted by abuse or neglect. It is recognised that CiC have higher levels of health need than children and young people from similar socio-economic backgrounds who are not in care. To ensure that health needs are identified and addressed, statutory health and dental checks must be carried out for CiC. The following charts show the numbers of CiC who have had an annual health or dental check over the last 4 years.

Number of CiC Having Health Checks 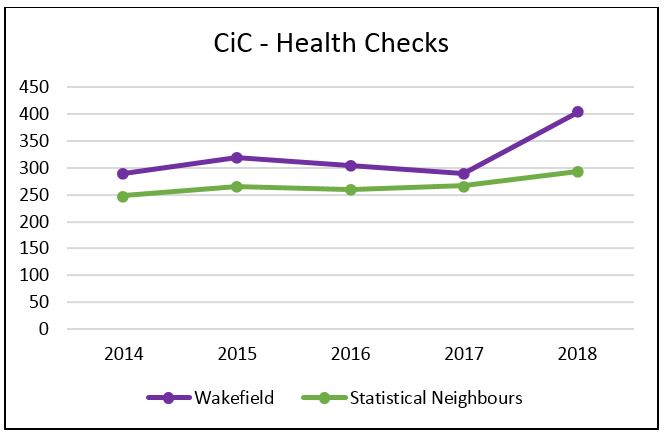 Number of CiC Having Dental Checks 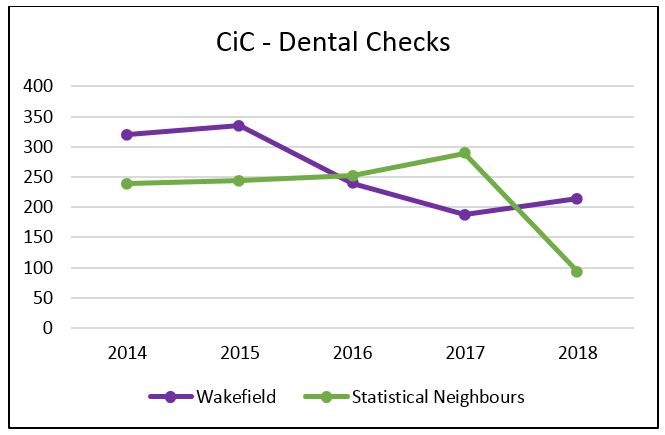 Following some decline in 2016 and 2017, completion of dental checks has begun to improve in 2018 and the number completed in Wakefield is higher than that of statistical neighbours. Completion of health checks also improved in 2018 compared with 2017. As with health checks it is vital that checks are carried out appropriately for all CiC to ensure that any preventative measures can be taken. Completion of both dental and health checks are areas that require attention.

The strengths and difficulties questionnaire (SDQ) is a standardised and validated mental health assessment tool used to assess CIC’s emotional wellbeing. A higher score indicates there are more difficulties for a child with a low score (up to 15) considered low need, 15 – 17 borderline and 17 and over high need. The table below shows the average SDQ score for CiC in Wakefield and comparator information.

Whilst the average score of 15.50 in Wakefield is not remarkably higher than the statistical neighbour rate of 13.94 and national rate of 14.20 and there has been a slight decrease since 2017, there has been an increase over the 4 year period and the 2018 score is just beyond the upper end of low need, meaning there will be a significant number of CiC with individual scores indicating high need. It would be prudent to explore this data further to assess levels of higher need which may need support from specialist services and there may need to discussion with Health providers to determine whether this need is being met.

% of Care Leavers in Suitable Accommodation

In Wakefield in 2018 90% of Care Leavers were in suitable accommodation which is higher than both the statistical neighbour and national rate.

% of Care Leavers not in Education, Employment or Training

In Wakefield in 2018 18% of Care Leavers were not in education, employment or training lower than in 2017 and lower than statistical neighbour and national rate.

Wakefield Council’s Children in Care Services include a wide variety of services to address the needs of our CiC, complying with all statutory requirements for CiC. Some services available to local CiC include the following:

NHS Wakefield Clinical Commissioning Group (CCG) are responsible for delivering statutory health assessments and providing support for CiC in Wakefield. This includes an initial assessment which is carried out by a Doctor when a children or young person enters care followed by an annual review health assessment by a team of Specialist Nurses. The team also support and provide training to Foster Carers and Health Visitors. The Specialist Nurses provide an ongoing source of support and advice to CiC, including “packages of care” to meet needs identified at health assessments, including improving understanding of healthy eating, healthy relationships, sexual health and contraception, hygiene and self-care, dental care, smoking, drugs and alcohol. They also support young people to transition to adult services and have developed a Leaving Care health summary to provide young people with important information about their health from birth. Heath assessments for under 5s are carried out every 6 months by Health Visitors. CiC are able to access universal health care services such as sexual health . All children are registered with a GP and a dentist to ensure their health needs are fully met.

The CCG is also commissioned to provide a dedicated CAMHS service for our CiC. In addition they co fund along with Children’s Social care an Emotional wellbeing Team with 4 practitioners offering tier 1 and 2 support to our CIC and also provide practical support for Residential Childrens Homes and Foster Carers. Wider support and training for staff and carers is also part of the team’s remit and there is close working with staff in the residential Childrens Homes, which is important when young people are not willing to directly see a mental health worker, so training for social workers and carers to support the young person is an alternative approach. Therapeutic Social workers also play an important role in supporting young people and carers when things have improved and they no longer need to be seen by the specialist service.