Culture and sport play an increasingly important role in transforming Wakefield in terms of economic regeneration and also bring about positive change in the ambition, self-confidence and the health of the district. The total value of tourism activity in Wakefield in 2013 is estimated to have been around £359 million.

The district has nationally important cultural heritage sites at Pontefract Castle, Nostell Priory, Wakefield Cathedral and the National Coal Mining Museum for England. The Yorkshire Sculpture Park and the Hepworth Wakefield are internationally important contemporary art galleries including works by locally born artists, Henry Moore and Barbara Hepworth. The leading cultural attractions across the district combined attracted over 1.2m visitors in 2019/20 (see table below). Significant refurbishment and redevelopment works has been undertaken at Pontefract Castle and Pontefract Museum in recent years, and Summer 2017 saw the opening of the new Visitor Centre at Pontefract Castle. Numbers visiting the Yorkshire Sculpture Park increased significantly in 2015/16 as a result of the Poppies sculpture by Paul Cummins.

Overall, there were an estimated 200,000 overnight trips annually to the district over the years 2017 to 2019 - a drop compared to estimates for the last few years. The value to the local economy is estimated to have been £25million per year. Short (3+ hours) leisure visits are far more numerous, with an estimated 13 million such visits per year over the years 2017 to 2019. The value of these visits is estimated at £347million per year.

There are currently 13 libraries in the district being run by Wakefield Council, and a mobile/home library service library service. Around 924,000 people visited the Council-run libraries in 2019/20, (slightly down on the previous year owing to COVID-19 closure in early March) and there were 510,000 library items issued during the same period.

Libraries are also important community and social hubs with 4,709 people attending adult and children’s events over the year. In addition to this libraries are free access points for people wanting to use a computer and free Wi-Fi, and in 2019/20 96,246 hours of public computer use were logged.

Wakefield council also runs a subscription-based schools’ library service serving local primary schools with classroom resources. In 2019/20, 64% of the district’s primary schools subscribed to the service and in addition library staff delivered formal and informal learning both in libraries and in school classrooms to 13,372 children.

Participation in Sport and Exercise 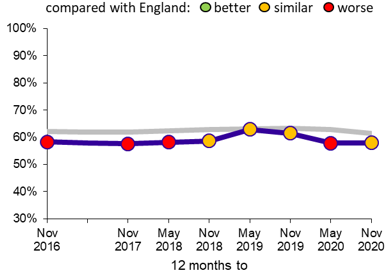 According to the Sport England Active Lives survey, 58% of adults aged 16 and over in Wakefield District are getting 150+ minutes a week of physical activity during the year to May 2020. This was similar to the England average (see chart opposite). This physical activity is in the form of walking, cycling, dance, fitness and sporting activities, but excludes gardening.

Levels of physical activity were also captured by Wakefield’s Health and Lifestyle Survey in 2009. This showed variation by age and gender in the frequency of vigorous activity undertaken by local people. Young men undertake substantially more exercise of this sort than their female counterparts, probably due to team sport participation, but that gender gap closes quite quickly as people get older. When asked, over half of residents responded to the survey by saying they would like to increase their level of physical activity.

The first Parkrun events in the district began in Pontefract, but groups now also run events at Nostell Priory and Thornes Park, Wakefield, and Frickley Country Park, South Elmsall. The overall number of runs has continued to increase (see chart below). Participation in 2019 included 9,560 runs at junior events, designed for children aged between 4 and 14. The Nostell junior parkrun no longer takes place, but new junior events started at Pontefract and Wakefield Thornes. The Frickley Country Park started in January 2019. COVID-19 led to the cancelling of all Parkrun events from mid-March 2020 to mid-July 2021.