‘Persons of nomadic habit of life whatever their race or origin, including such persons who on grounds only of their own or their family’s or dependants’ educational or health needs or old age have ceased to travel temporarily, but excluding members of an organised group of Travelling Showpeople or circus people travelling together as such.’

In addition, Planning Policy for Traveller Sites (PPTS) 2015 provides the following ‘clarification’ for determining whether someone is a Gypsy or Traveller:
‘In determining whether persons are “gypsies and travellers” for the purposes of this planning policy, consideration should be given to the following issues amongst other relevant matters:
a) whether they previously led a nomadic habit of life;
b) the reasons for ceasing their nomadic habit of life;
c) whether there is an intention of living a nomadic habit of life in the future, and if so, how soon and in what circumstances.’

A glossary of the Gypsy and Traveller communities/populations can be found at the bottom of this page, under Definitions.

The latest Traveller caravan count figures available are from the January 2018 Count of Traveller Caravans (England)[1], which nationally found that:

The 2011 Census identified a total of 93 households in Wakefield District with a ‘White: Gypsy or Irish Traveller’ ethnicity. Of these, 42 households lived in a caravan or other mobile or temporary structure and 51 households lived in bricks and mortar (house, bungalow, flat, maisonette or apartment).

The triangulation of secondary data, council records and fieldwork survey has identified a total of 59 existing Gypsy and Traveller households and 66 pitches across Wakefield District.

The figures for the last seven Traveller caravan counts for Wakefield District are set out in Table 4.2. This shows that an average of around 102 caravans have been recorded on sites across the Wakefield District area during the seven-count period. Of these, around 91 caravans (89%) are on authorised sites with planning permission. Of these, around 69 are on social-rented sites (67%) and 22 are on private sites (22%). An average of around 11 (11%) of recorded caravans are on unauthorised sites, without planning permission. 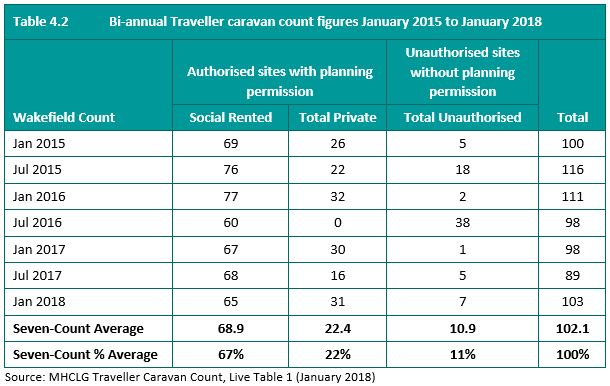 Whilst it is recognised that some families may not identify themselves as Gypsies or Travellers in research, the 2011 Census identifies a total of 93 households in Wakefield District as having a ‘White: Gypsy or Irish Traveller’ (WGoIT) ethnicity (Table 4.1a). Of these, 54.8% (51 households) lived in bricks and mortar accommodation (house or bungalow, or flat, maisonette or apartment) and 45.2% (42 households) lived in a caravan or other mobile or temporary structure.

Special tables were commissioned by Office for National Statistics (ONS) to cover the ethnicity and several data sets were produced and made available on the ONS website on the 21st January 2014. The main article can be found here.

The 2011 Census provides further information on actual residents and Table 4.1b provides details of the breakdown of people.

The cultural needs of Gypsies and Travellers differ from those of the rest of the population and consideration of culturally specific requirements such as the need for additional permanent caravan sites and/or transit sites and/or stopping places (or improvements to existing sites) are key to this study. The research has therefore explicitly sought information from Gypsies and Travellers from across the area living in different types of accommodation.

There is a total need over the next five years (2018/19 to 2022/23) for 112 pitches in Wakefield District compared with a supply of 49 authorised pitches. The result is an overall cultural shortfall of 63 pitches.

Having established a substantial need for authorised pitches, the extent to which this need can be addressed through turnover, site expansion/intensification and regularisation (i.e. authorising sites) is now considered.

Over the next 5 years, there will be a need for 63 additional authorised Gypsy and Traveller Pitches. Taking into account turnover, potential development on existing sites and regularising non-authorised sites, 28 additional authorised pitches could be provided. This would reduce the 63 shortfall to 35 and the overall plan period need from 115 to 87.

Households moving through Wakefield District may require temporary accommodation which is usually provided through transit sites and stop-over places. Transit sites are intended for short-term use, are usually permanent and authorised, but there is a limit on the length of time residents can stay. A transit pitch normally has a hard standing, electric hook up and amenity shed. Stop-over places are usually unauthorised temporary camping areas tolerated by local authorities, used by Gypsies and Travellers for short-term encampments, and sometimes with the provision of temporary toilet facilities, water supplies and refuse collection services.

Whilst we do not have information for Wakefield, the following findings give a good indication of Gypsy and Traveller populations, and we can therefore assume that these are a good representation of these communities and their respective health.

A report by the Traveller Movement, commissioned by the National Inclusion Health Board (NIHB), looking at how the living conditions of Gypsies and Travellers lead to poor health. The report found that:

Comparing Wakefield to other LA’s and England.
The below table demonstrates the current position of Wakefield in relation to our Yorkshire and Humber neighbours against the following indicator: “The percentage of school children who are Gypsy/Roma“. Wakefield (0.18%) is currently 0.12% lower than the England average (0.30%).