A carer is someone who provides unpaid help and support to a relative, friend or neighbour, who could not manage without that help due to frailty, long term illness (including mental health), disability or substance misuse issues.

A young carer is an individual under the age of 18 whose life is in some way restricted because of providing unpaid care. Young carers are a vulnerable group as they are more likely to miss school, be bullied, have poor mental health, have lower educational attainment, struggle financially, and be NEET (not be in education, employment or training).

At the last Census (2011), in Wakefield 2,586 children and young people (aged under 25 years) were recorded as being a Carer; this is 2.8% of the population aged 0-24 years. The proportion of Carers in Wakefield is higher than the average for England (2.5%) and the Yorkshire and the Humber region (2.5%), but this is not statistically signifcant. Data shows that the proportion of young carers in Wakefield has not changed much since the 2001 Census, when 2.7% of children and young people were recorded as Carers.

The roles and responsibilities that carers have to provide varies widely; ranging from help with everyday tasks including getting out of bed, and providing personal care such as bathing, to emotional support such as helping someone cope with the symptoms of a mental illness. Some carers, in particular younger carers, are not known to be carers. They often do not tell relatives, friends or health and care professionals about their responsibilities because of a fear of separation, guilt, pride or other reasons.

The map below shows the proportion of people providing unpaid care within the Wakefield District. The highest proportion of unpaid care is shaded blue. This shows that Carers are distributed throughout the District, and appear to be more concentrated in areas where the population is older. 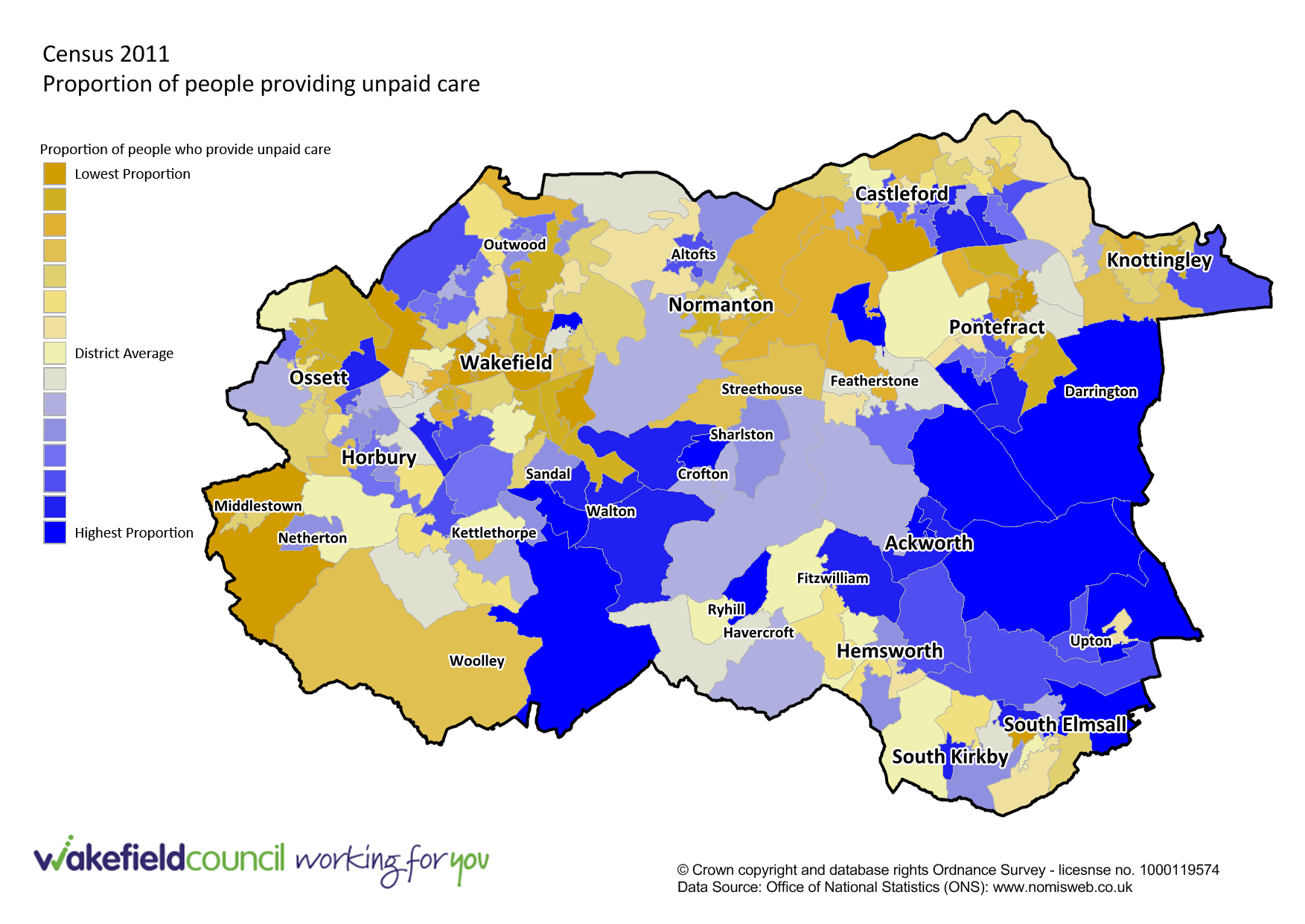 Comparing the two maps, there appears to be a disproportionate number of Carers providing high levels of unpaid care. In some areas of the District, although there are fewer people providing unpaid care, they are delivering more hours of care per week than in areas where there are a greater numbers of Carers. 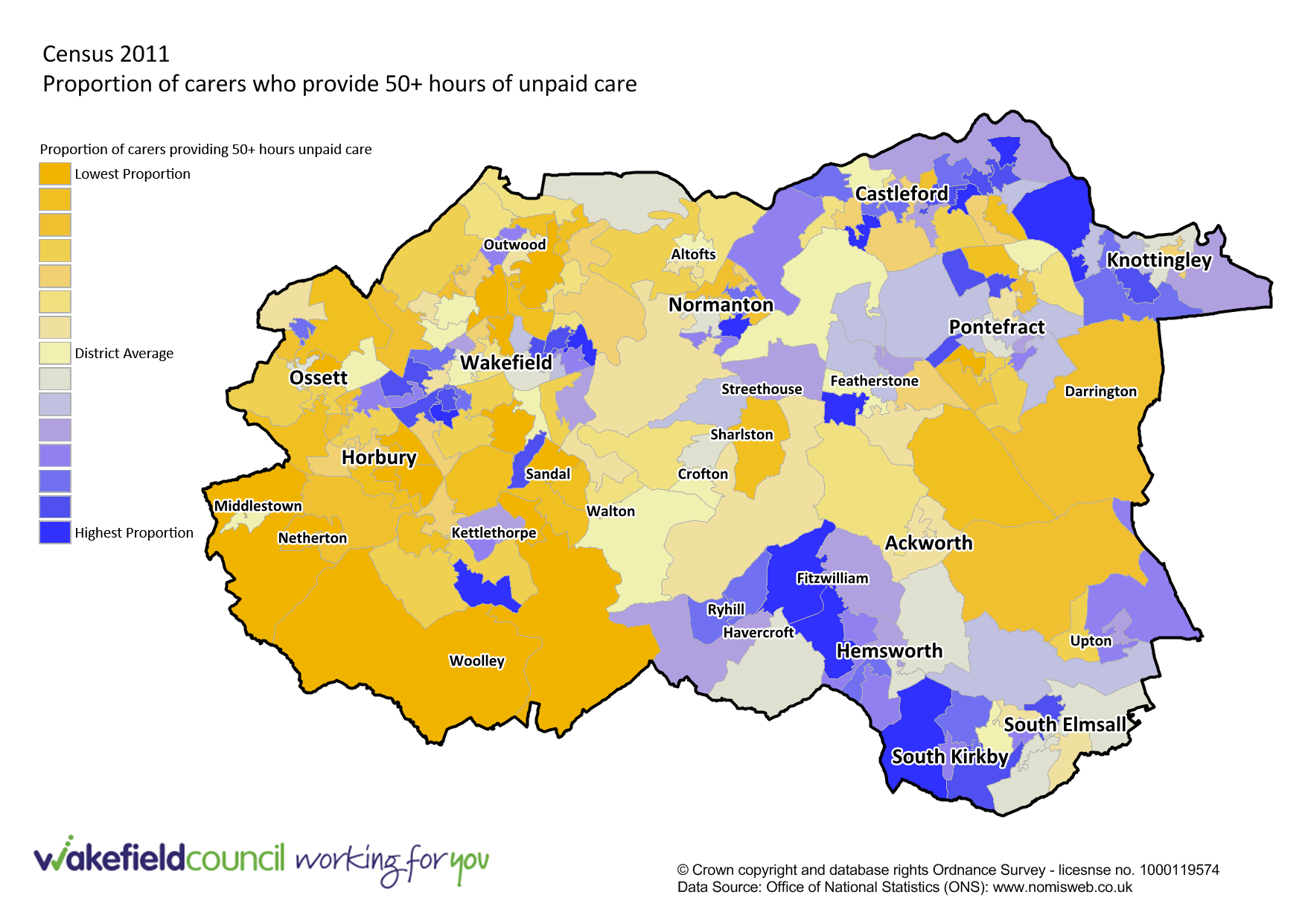 The identification of carers is a significant public health challenge, as carers do not often separate the role from their usual relationship they have with the person they care for. This has implications for support and prevention services for carers, as they are difficult to target within the population.

Evidence suggests that Carers are less likely to access services such as healthcare and social support than the general population, due to a tendency to prioritise the needs of the person they care for above their own. The implication of this is that the health and wellbeing needs of Carers are not often met as they emerge, and often Carers will only seek support when this has worsened to the point where the Carer cannot provide their usual care to the person they care for and seeks professional support for the person.

There are a number of health inequalities between Carers and the general population who do not have caring responsibilities. This is notable among young Carers; 1 in 12 children in the UK are estimated to be young carers with an average age of 12 years old. Approximately 39% of young carers reported that nobody in school was aware of their caring role despite young Carers being 1.5 times more likely to have a special educational need or disability than their peers. Additionally, an estimated 68% of young carers said they were bullied in school, due to their caring role.

Local data from the 2015 Children’s Survey indicates that 15% of Year 5 pupils and 9% of Year 9 pupils care for someone in their home that has a serious illness or disability; 2% of primary pupils said that this caring role takes up more than two hours of their day. Pupils who reported that they were a carer were also more likely to report that they had tried smoking that they have been offered drugs, that they have tried drugs and that they have been bullied.

Comparing Wakefield to other LA’s and England.
The below demonstrates the current position in Wakefield in relation to our Yorkshire and Humber neighbours across several of the key carer indicators. Wakefield is currently similar than the England average for many indicators (those indicators coloured yellow).
You can click on the “trends” option below to explore the trends in the various measures.

Services for carers are offered by a number of organisations. Please see below for more details:

Wakefield Youth Work Team (WFYOUTH) coordinate and deliver a programme of high quality youth work for young people aged 11 and above to fully prepare them for adulthood; equipped with the personal and social skills to be valued and engaged as citizens, capable of making positive choices and accessing opportunities.

The ‘Wakefield Early Support Advice Information and Liaison Service’ offer support for families, including Young Carers, who are caring for a child or a young person, aged 0 to 25 years old, with special educational needs or a disability.

You will find lots of useful information within the Carers Wakefield & District website; they offer support and groups for Young Adult Carers aged 17 to 25.

You can learn more about the services for Young Carers in Wakefield and the support that is offered to help alleviate pressures on mental health, including education and leisure opportunities HERE.

Young Carers Pathway – this document identifies what actions practitioners should take when they identify a young carer, and where to get additional support.

The Children and Families Act 2014