Below are 10 key facts about our health in Wakefield in 2019. For more detailed factsheets, see the JSNA Annual Summaries. 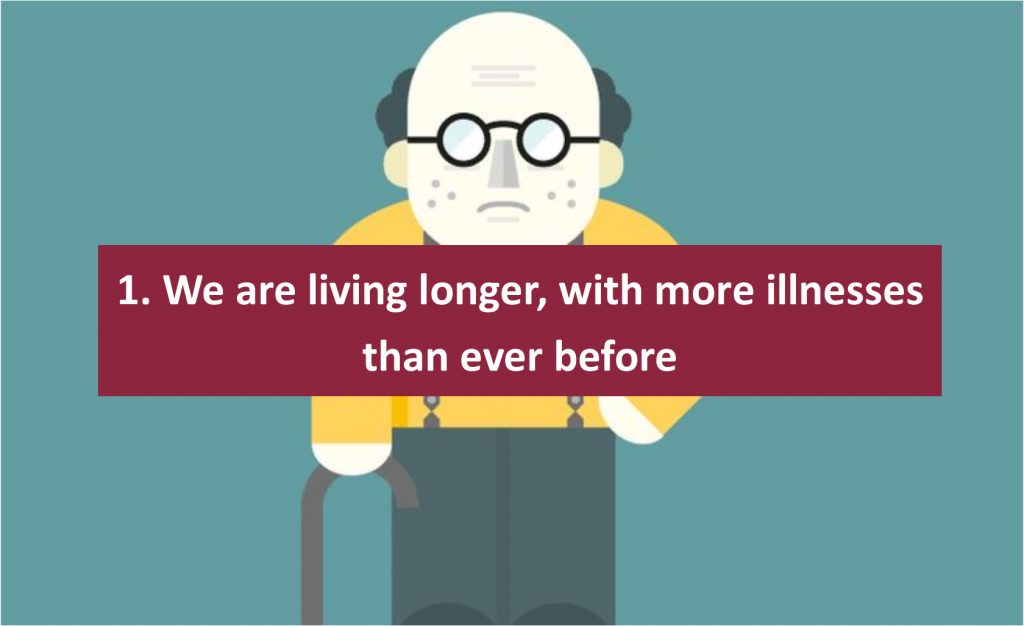 Life expectancy has been rising. Data for 2016 show that based on current mortality rates, a baby born in Wakefield district today would live on average 78.0 years (male) or 82.0 years (female). For males this is 1.5 years less and 1.1 years for females than the national average values.

It’s great news that we’re living longer but the stats also show that we are spending much of the extra time suffering with poor health – around 16 years of ill health for men and 19 for women. In Wakefield males have over 10 years living with a disability, for females this is over 13 years.

Without increasing illness prevention activity (e.g. through people consuming less alcohol, quitting smoking and eating well), we face creating greater levels of burden on the health and care system than we are already witnessing.
As a health and care system we need to look holistically viewing wider issues that affect our health such as jobs, housing and our food environment to help reduce the impact on health and care.

During the same period death rates from dementia and Alzheimer’s have increased by 60% in males and have doubled in females, partly due to our ageing population and greater awareness of dementia.
There is more information available on deaths in Wakefield here
As well as looking at causes of death (‘mortality’) the report also looks at major causes of illness (‘morbidity’).

You might be surprised to learn that the biggest causes of morbidity in England are low back and neck pain followed by skin diseases, with depression in third place. Wakefield has seen a significant rise over the last 5 years in those who are off work due to mental ill health.

Along with mental health, poor musculoskeletal health (like back and neck pain) accounts for the majority of sickness absence in the UK, making this an issue of concern beyond the health sector. Self harm in young people is of particular concern in Wakefield district where significant rises  have been seen over the last 10 years.

Wakefield ranks poorly for life expectancy in men and women across the district, 299 and 290 respectively. They have consistently been in this order for the 10 year period available. The rank is for each district in England and Wales which divides the country in to 346 districts, where a rank of 1 is the best.

Both men and women living in the most deprived areas can also expect to spend nearly 20 fewer years in good health compared with those in the least deprived areas. Some people in deprived areas are spending nearly a third of their lives in poor health.

It goes without saying that smoking, having a poor diet and not getting enough exercise are key risk factors for a range of serious diseases.

Smoking is still the leading cause of preventable ill health in our nation and locally in Wakefield. The national infographic above shows the smoking burden still across our nation. Wakefield has alarming level of mothers who smoke at time of delivery, 1 in 5 as a whole and in certain communities this is 1 in 3.

Increasing the levels of quitters across the district would have positive impacts on the level of premature mortality mentioned above from cancer and cardiovascular disease.

Wakefield district has lower levels of consumption of fruits and vegetables, which combined with a high density of fast food outlets demonstrates the need for an improved diet to help tackle obesity locally.

In poorer areas the prevalence of inactivity and smoking are both highest, while the proportion of people eating the recommended 5-a-day of fruits and vegetables is the lowest.

Alcohol consumption across England is increasing, and unsafe levels of consumption are highest in middle aged adults. Consumption in the young shows a decreasing trend for the first time in decades. Wakefield has mirrored this trend, with decreasing level of alcohol related harm in the under 18 and increasing levels in the adult population.

Health conditions that are due to or closely related to alcohol are at the highest levels seen for some time in Wakefield, nearly 3,000 admissions of this type occurred last year. Mortality for alcoholic liver disease has also increased greatly in recent times.

Related to this is the number of violent crimes that occur both nationally and locally. This is a rising trend and the consequence of this, injuries caused deliberately, are rising too for our area.

Long-term exposure to particulate air pollution is linked to thousands of deaths nationally, particularly from heart or lung disease. Wakefield has a longstanding high rate of deaths from these diseases, due to the industries that were prevalent in the district and high smoking levels.

Recent evidence has shown how particulate matter is damaging our health. Particularly, older people, the very young, and people with existing heart and lung conditions are more vulnerable to the effects of air pollution

Flu poses the biggest risk to the population and accounts for much of the 8% of deaths. The elderly and those with long terms conditions are particularly vulnerable to the flu virus. Wakefield districts uptake in the flu vaccine could be improved, preventing these complications in the vulnerable.

Infectious diseases such as Tuberculosis (TB) which are more of an issues in other districts, are low for Wakefield but regular monitoring to ensure that a large scale out break locally does not happen. Work to reduce the volumes of antibiotics that are used appropriately, to try and reduce antimicrobial resistance is another issues for England and Wakefield alike. Consumption of antibiotics fell across all healthcare settings for the first time in 2014/15.

Oral health in Wakefield is worse when compared to the national average. Over time things have become worse in the district with children’s dental health deteriorating and causing more hospital admissions for extraction of teeth.

Diet, hygiene, exposure to smoking and several other factors have negative effects on oral health, resulting in tooth lost and other diseases. Wakefield as mentioned earlier is a negative outlier for the factors, so is of no surprise that oral health is poor in the district.