In the UK, the height and weight of primary school age children in Year Reception and Year Six is measured as part of the National Child Measurement Program (NCMP). The NCMP is part of the government’s obesity strategy and is a robust source of information on childhood obesity to tackle the epidemic of obesity in the UK.

Whether a child is overweight or obese is determined by the child’s BMI (body mass index), a ratio based the child’s height and weight for their age. Obesity is, at root, caused by an energy imbalance; energy intake through the diet exceeding the amount of energy used through physical activity. For more information on diet and nutrition in children, visit the Diet and Nutrition in children page. For additional information on physical activity, visit the Physical Activity in children page. Children who are overweight or obese according to their BMI are classified as ‘carrying excess weight’. Childhood obesity is associated with a number of different problems; children who are overweight throughout childhood are more likely to become obese adults and develop diseases including diabetes and cardiovascular disease at a younger age. Childhood obesity is also associated with a higher chance of premature death and disability in adulthood. Obesity is preventable, and by preventing it early in childhood it means that some of the complex problems that arise as a result of obesity can be minimised in early adulthood and beyond. In Wakefield. around 23% of 11 to 12 year olds are classified as obese/very overweight and around 11% of 4 to 5 year olds, compared t0 20% and 10% nationally. 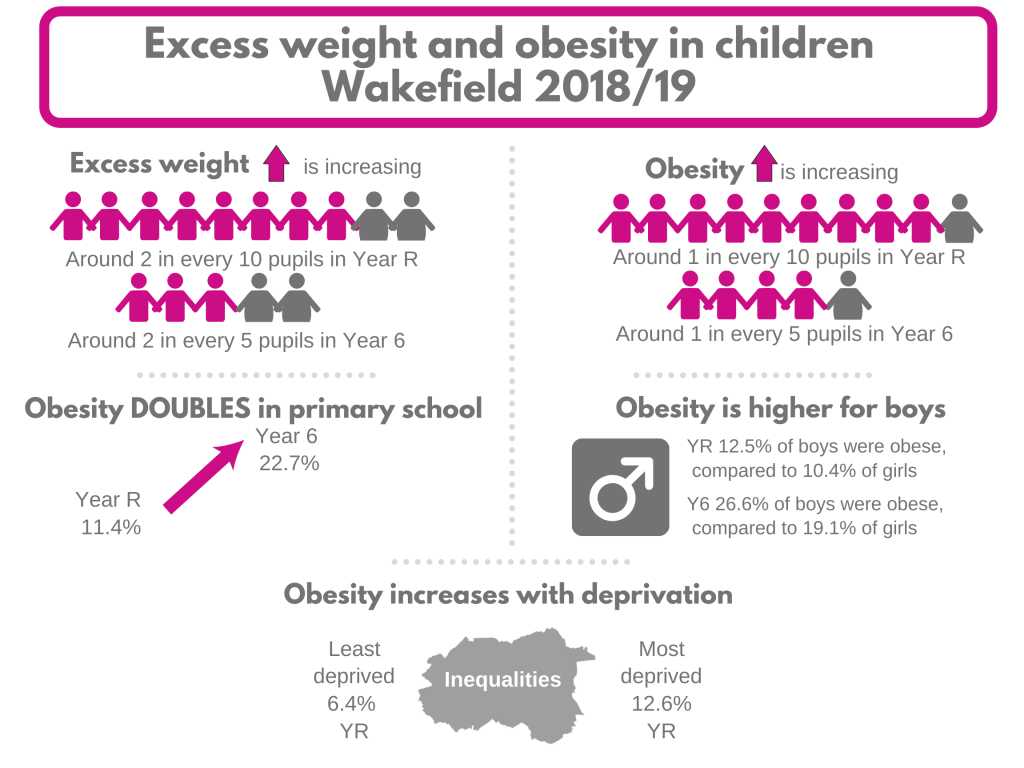 Generally, across England, obesity rates are highest for children from the most deprived areas. Wakefield follows this trend less closely, with large amounts of variation between obesity levels and deprivation. 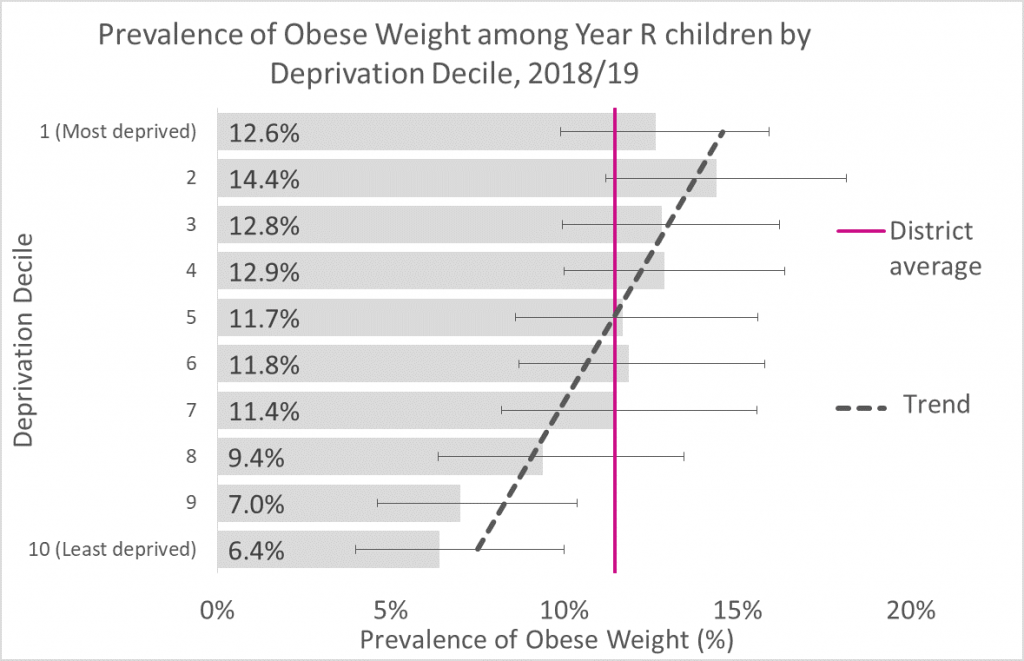 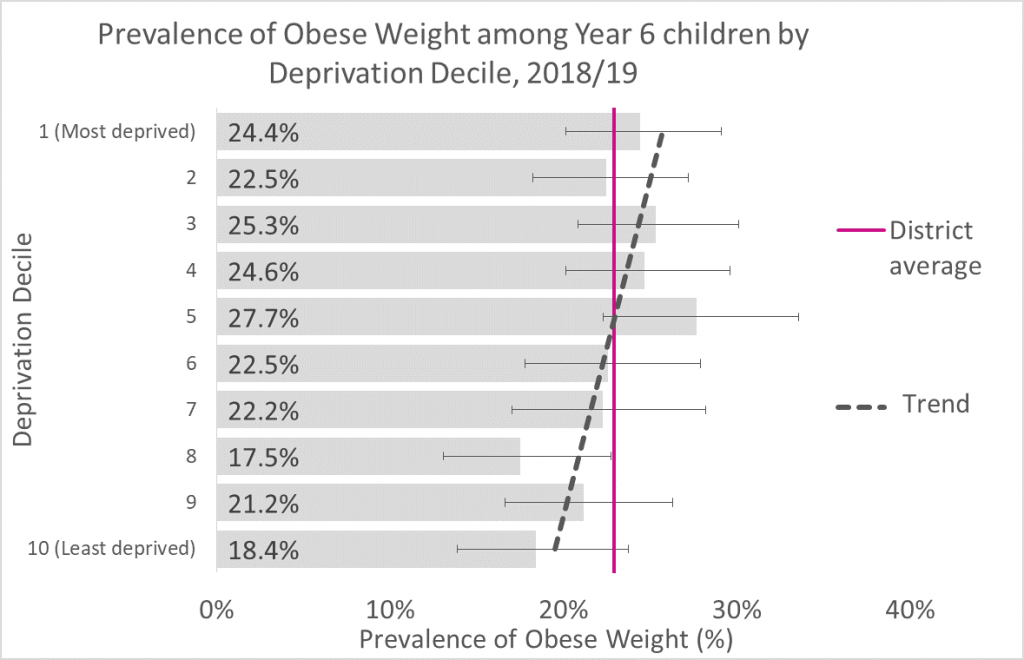 There is also a distinct gender difference between obesity rates in boys and girls; boys generally have higher excess weight and obesity rates. 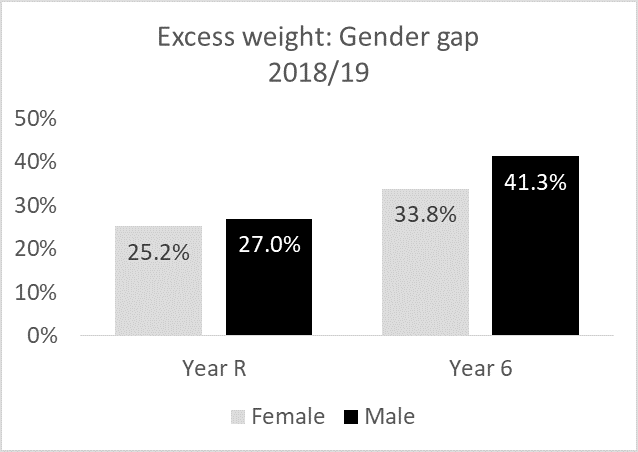 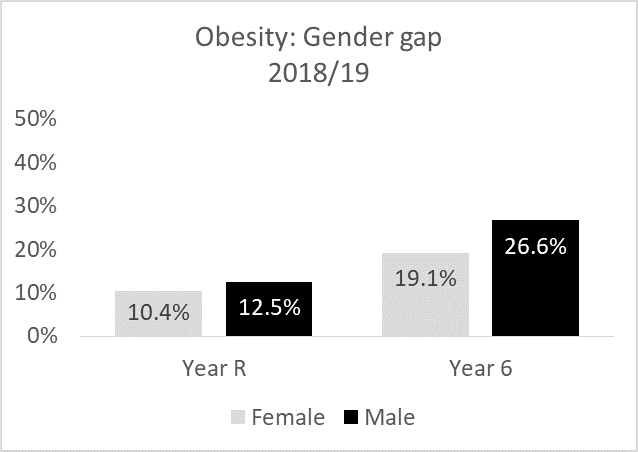 There are also differences in the pattern of obesity across electoral wards in Wakefield district, further information can be found in the Wakefield NCMP report for 2018/19.

Read a report on the NCMP data for Wakefield here.