Gambling is a leisure activity defined as betting, gaming or participating in a lottery. There are many ways to gamble including in gaming arcades, placing bets at betting shops or events, playing bingo, visiting a casino, taking part in a lottery or using gaming machines. Many of which now have online applications which are available 24/7, making it more accessible and increasing the opportunities to gamble more than ever before.

Not everyone who gambles develops a problem. Gambling is increasingly being considered a public health issue in the UK due to rising concern over the numbers of children gambling, despite gambling being age restricted (18+). Problem gambling can affect anyone at any time; whilst rates of problem gambling among all adults in Britain tend to be less than 1% (1.4% in large metropolitan areas), there are some groups that are more likely to experience problems. The Gambling Act 2005 recognises gambling as a legitimate leisure pursuit, but sets a statutory objective that children and other vulnerable people should be protected from being harmed or exploited.

For most people, gambling is an enjoyable, occasional pastime. While fewer than one in a hundred people will develop problems sufficiently severe to meet the criteria of ‘problem’ or ‘pathological’ gambling, 5% of gamblers show at least one sign of difficulty managing their behaviours for example being preoccupied by gambling, repeatedly struggling to stop gambling, gambling to escape from problems or lying about their gambling.

Problem gamblers are those who gamble with negative consequences and a possible loss of control, according to officially recognised screening tools. Nationally, around 0.7% of the population are classified as problem gamblers, according to the 2016 British Gambling Prevalence Survey. Of increasing concern are groups identified as ‘at-risk’ gamblers, people who are experiencing some problems, difficulties or negative consequences from their gambling, but are not categorised as problem gamblers.

Problem gambling – gambling to a degree that compromises, disrupts or damages family, personal or recreational pursuits

At risk gambling – people who are experiencing some problems, difficulties or negative consequences from their gambling but are not categorised as problem gamblers

Gambling related harm – some people who do not gamble, or who do so responsibly may experience harm because of the consequences of the gambling behaviour of others. Gambling related harm includes those who are at risk gamblers, problem gamblers and those experiencing harm because of the gambling behaviour of others.

Gambling-related harm has a number of impacts on health and wellbeing, such as:

Gambling is becoming more widely accessible to people of all ages, including young people. The rise in Fixed-Odds Betting Terminals (FOBTs), online gambling applications and gambling-style games has led to a rise in gambling-related harm among people aged 12-14. The gambling industry is charged by the Gambling Commission with supporting and protecting vulnerable consumers, including those experiencing mental health problem and children and young people, people with low IQ and those who are substance abusers/misusers as evidence would suggest are those most vulnerable.

GamCare is a UK charity which provides information, advice and support for anyone affected by problem gambling. GamCare also operate the National Gambling Helpline, from which a variety of information about callers is recorded including the first part of their postcode. Below are some statistics collected from this helpline for people who provided a postcode beginning ‘WF’.

Number of callers has remained fairly consistent over the last few years, in the three year period 2015-2018, around 200 gamblers in Wakefield accessed support via the GamCare helpline.

The chart below shows a breakdown of the methods of gambling used by Wakefield (WF postcode) callers who used the national gambling helpline from 2015/16 – 2017/18. 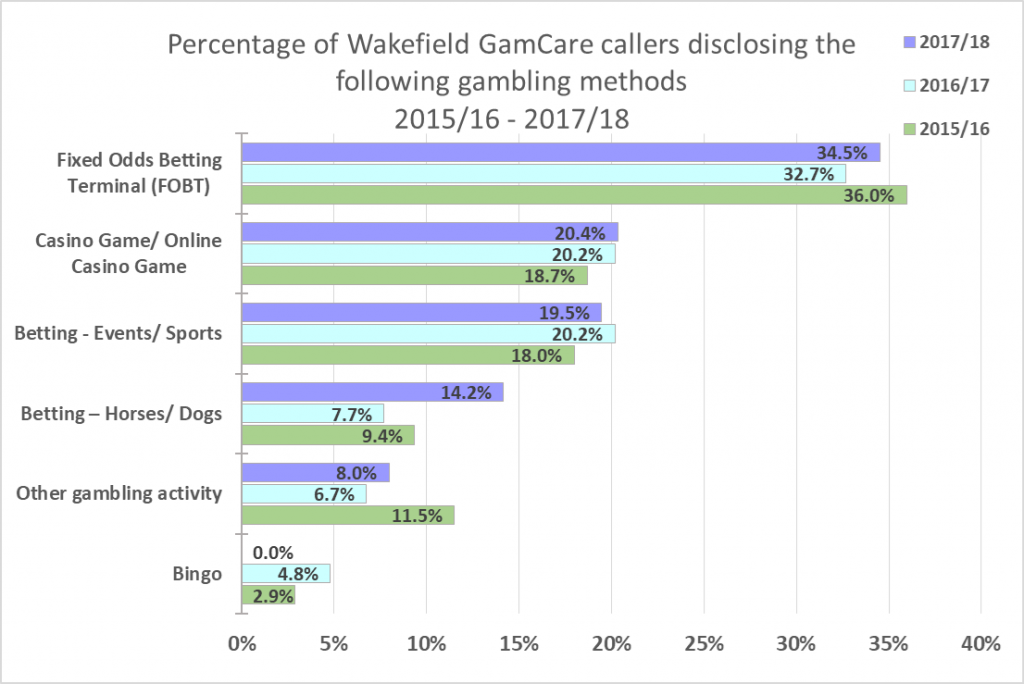 Gambling is strongly linked to the wider determinants of health, particularly education, deprivation levels, income and other health issues. There are certain groups which may be more likely to experience problems with gambling. These include: 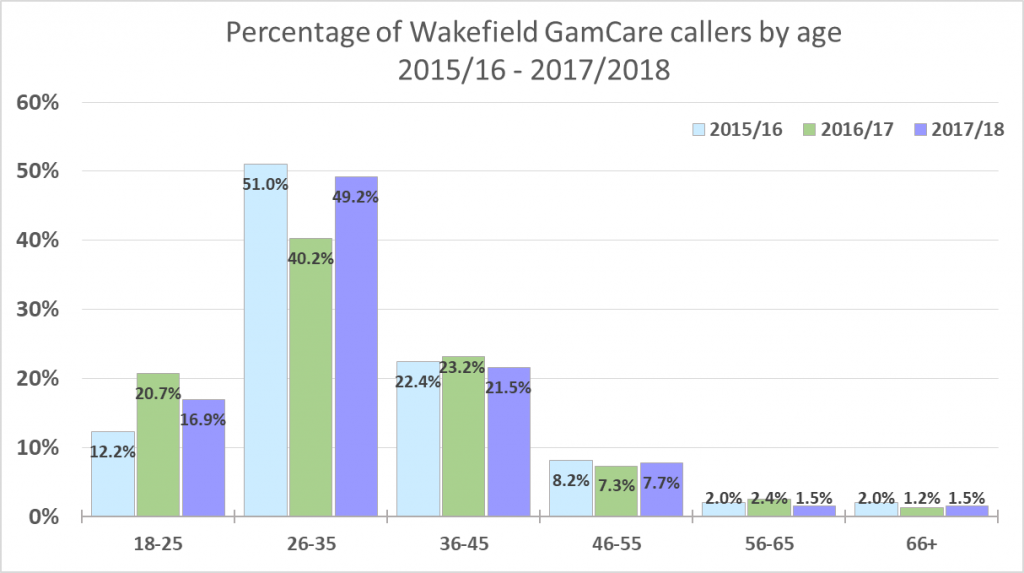 Low income – Generally those of lower income are less likely to gamble but those that do spend a higher proportion of their income on gambling. This is highlighted as a concern given the lesser ability of lower income households to protect themselves from financial instability (Brown et al, 2011).

Debt – There is evidence that those in debt and those using money lenders and/or pawnbrokers are more likely to be problem or at risk gamblers (Meltzer et al, 2012).

Unemployment – There is a consistent body of evidence showing that, for whatever reason, those who are unemployed and who gamble are more likely to experience adverse outcomes from their gambling than those in paid employment.

Area deprivation – There are a number of British surveys that have consistently shown that those living in more deprived areas are more likely to experience problems with their gambling behaviour. This was despite having roughly the similar levels of past year gambling participation to those who live in less deprived areas.

Wardle (2015) looked at the distribution of machines and licensed betting offices and argues that there was clear and consistent evidence of a spatial skew, whereby high density machine zones or areas with licensed betting offices are more deprived than others. Recent research has shown that among gamblers who held loyalty cards, rates of problem gambling (28%) were higher among those who lived within 400 metres of a concentration of betting offices than those who did not (22%) (Astbury & Wardle, 2016).

The map below shows the distribution of licensed gambling premesis in Wakefield and deprivation of the area. 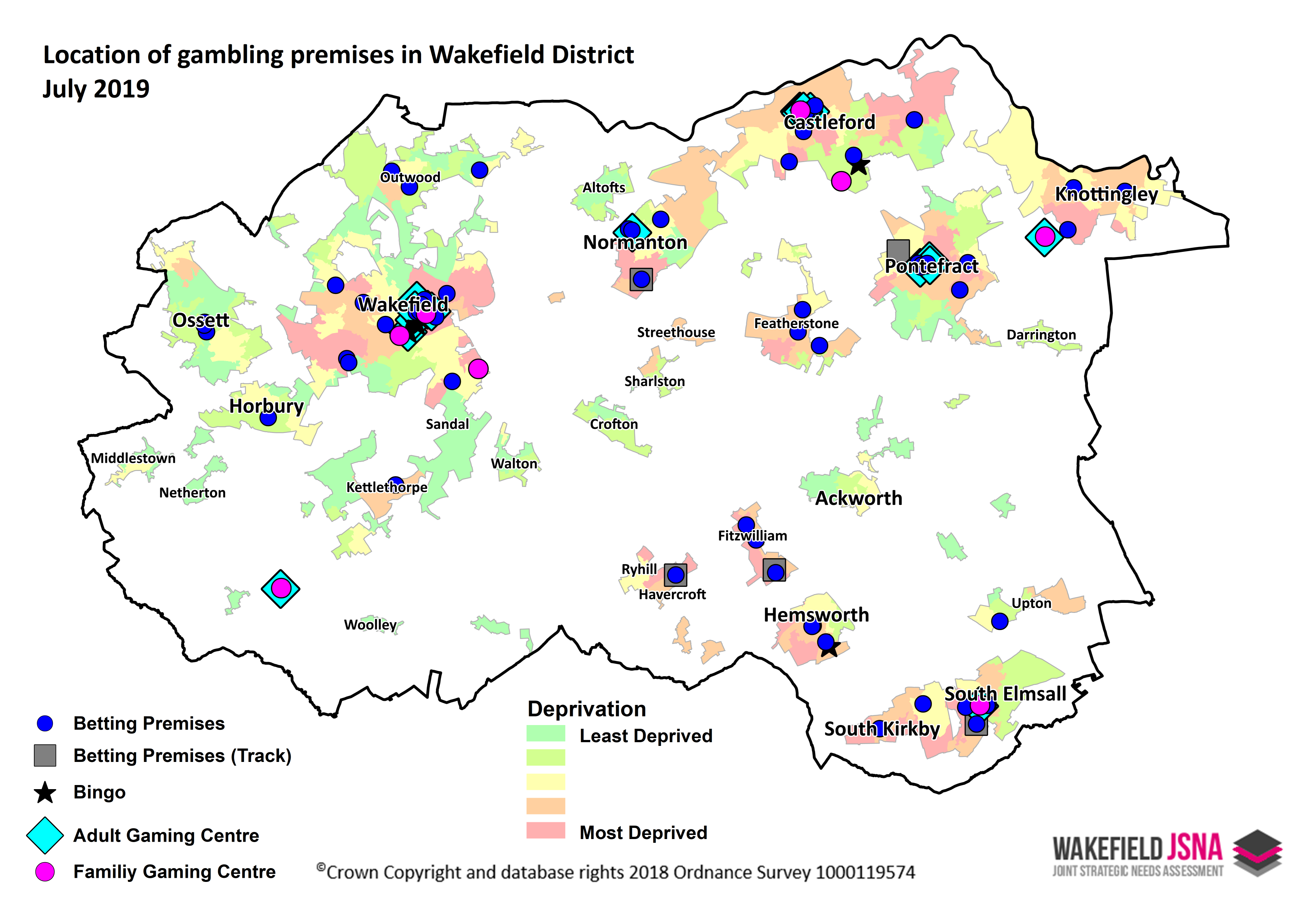 Additional information can be found on the Wakefield Council website